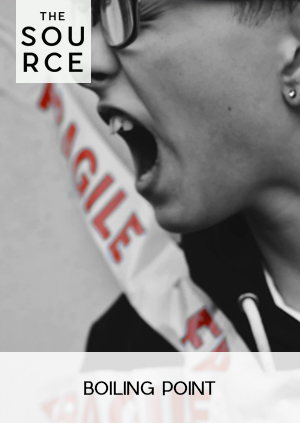 I'm certainly not an MTV watcher; and I hope that most of the students in our youth ministry aren't either (keep hoping, Jeanne), but MTV gives us some great ideas for connecting with today's youth culture. This full-length drama, "Boiling Point," is one of those.

The TV version of this concept is a program that purposefully tries to push people to their boiling point in a certain amount of time. The results are both humorous and painful. So the drama we wrote for this Source builds around this simple, but powerful concept. It's about a young man who slowly reaches his personal boiling point through negative turns in his life. At its conclusion, he attempts to take his own life. (The lights go out and you never know if he succeeds or not.)

The drama was a really powerful night for us, and I'm so thrilled to share it with you. Over 40 teenagers gave their lives to Christ at its conclusion. Best yet, the script is not difficult to pull off.

So enjoy listening and know, that though full-length dramas are obviously extra work, they are always really worth the effort.

Yours for a high "Boiling Point,"